What the Federal Government Can Do To Improve American Education

Sometimes looking at the past can help us see the present more clearly. And that applies to the 2017-2018 NSDA topic:

Resolved: The United States federal government should substantially increase its funding and/or regulation of elementary and/or secondary education in the United States.

“Broken Promises: What the Federal Government Can Do To Improve American Education,” (Brookings Institution, March 1, 2000) is itself 17 years old, and begins with a valuable survey of federal involvement in K-12 education. Brookings is the oldest of public policy think tanks, and known as center or center-left.

From an economist’s perspective, a key insight in the article is the institutional process of federal aid to education. Instead of direct aid to teachers, students, or families, federal funding is filtered through and drained by a series of bureaucracies:

Federal programs typically travel first to the 50 state departments of education, which send them to local school districts, then to administrators at school sites, and finally, perhaps, to classroom teachers. At each stop, money is drained off to support a bureaucracy. Regulations are tweaked and molded to fit local priorities.

The article’s authors note that for most of U.S. history, education wasn’t seen as a federal role, and later federal officials just collected and reported education data from the states. The Eisenhower Administration in 1958, in response to the Soviet’s launch of Sputnik, began federal funding for science education on national security grounds.

The Brookings article outlines federal education funding from 1965 to 2000:

Federal government responsibilities in education have always been limited. The word “education” does not even appear in the U.S. Constitution. States and local school districts have always made the day-to-day decisions about instruction, teachers, textbooks, and the like. For most of the nation’s history, Washington confined itself to collecting data on school systems and disseminating information on the progress of education. Until 1965, when the Elementary and Secondary Education Act was passed, federal support for K-12 education was minimal. Today the federal government foots only about 7 percent of the nation’s K-12 education bill, and its share has never exceeded 10 percent.

Next the article provides evidence (though dated) for the negative:

The public’s desire to improve public schools, though laudable, does not justify expanding the federal government’s role in education. There is scant evidence that existing federal programs are accomplishing their goals; indeed, most evaluations of the major federal categorical programs suggest that they are failing to make a dent in the problems they were designed to solve. Even Head Start, probably the most popular federal initiative, has been unable to close the large gaps in achievement between poor children and their advantaged peers. Yet Congress has been consistently unwilling to overhaul or discontinue any education program, regardless of its lack of effectiveness. Every federal program can mobilize a devoted constituency on its behalf, and even the smallest programs have kept their federal funds flowing.

The Public Choice perspective is this dynamic of beneficiaries of current federal programs (though who administrate the program at the federal, state, and school district level, and those schools and teachers who receive the grants), who have strong motivations to lobby for keeping the programs going, and the lack of motivation or even information that the wider audiences of other teachers, students, parents, or taxpayers have to advocate or even know about alternatives that could better serve students.

And for affirmatives, the author argue for improving current federal education programs before funding new initiatives:

Before launching bold education initiatives, the federal government should follow a simple rule: improve what it does now before attempting anything new. Even then, Washington should never impose new programs on local authorities without clear evidence that the proposed intervention will improve children’s education.

The two most important federal categorical programs—special education and Title I—need to be overhauled. Both could be changed by the president and Congress in ways that would help the children who are their intended beneficiaries.

The Obama administration has offered states the chance to waive some requirements of the No Child Left Behind Act in recognition that parts of the law are dated. States are required, however, to make specific reforms in exchange for increased flexibility.

The Internet is full for pro and anti Common Core posts and websites, offering a challenge for students to figure out which scholars and organizations are reliable for debate research and cases. 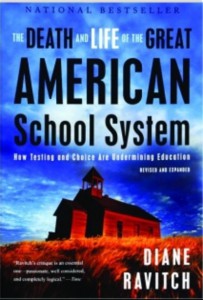 Diana Ravitch, a coauthor of the 2010 Brookings study quoted from above, was also author of the influential 2010 book: The Death and Life of the Great American School System: How Testing and Choice Are Undermining Education (now in it’s 3rd edition). This July 7, 2016 Washington Post article “A surprising truth about American education,” note Ravitch supported “test-based school reform,” worked for the Bush Administration, and supported No Child Left Behind legislation:

But after seeing the effects of these reforms on students and teachers, Ravitch changed her mind and wrote about her conversion. The book helped start an anti-reform movement of which she has been the titular leader, and which has grown significantly among parents, educators, advocates and others. Now she has updated the book — and changed at least one position she had when she wrote the first edition.

The book discusses Ravitch’s change in thinking about standards-based education, based in part on the troubled development and implementation of the Common Core State Standards and plenty of other issues. She writes that No Child Left Behind was “the worst education legislation” Congress ever passed because, among other things, it “presumed that Congress knew how to reform schools, which it does not” and “assumed that scores on standardized, multiple-choice tests were the end goal of education, but they are not.”

Here is a chapter by chapter study guide (pdf) for The Death and Life of the Great American School System (not sure which edition). Here is Amazon link to latest edition, with “Look Inside” feature.

And it seems clear from the title of Ravitch’s 2014 book that she is skeptical of some proposed reforms: Reign of Error: The Hoax of the Privatization Movement and the Danger to America’s Public Schools (Vintage; Reprint edition (August 26, 2014)).

Ravitch writes on changing views here: “Why I Changed My Mind About School Reform: Federal testing has narrowed education and charter schools have failed to live up to their promise,” (Wall Street Journal, March 9, 2010). Atlantic article from 2011: “Diane Ravitch: Teachers’ Hero or Education Hypocrite?” and “The Education of Diane Ravitch.”

And from June 2016 Washington Post: “Diane Ravitch to Obama: ‘I will never understand why you decided to align your education policy with that of George W. Bush’”

This May 2, 2017 post quotes Ravitch from a  Network for Public Education gathering:

She started out by saying that, “the latest and most serious threat to our public schools is DeVos” and her privatization agenda. The privatization effort she said, has become a “steamroller turning our citizens into consumers.” And like John Kuhn did, she made the point that “we have a culture in our schools now that suppresses the joy of learning and of teaching.” That, “test scores of 15 year olds are not a predictor of either their’s, or our nation’s future.” And that, “the achievement gap construct – created by standardized tests designed for some kids to fail” – does nothing to help them succeed. She also pointed out that “a nation ”that doesn’t trust its teachers’ judgement, will never have a great education system.”

For the lastest Diane Ravitch ve