Grants for special education, which also go out by formula, get $12.7 billion in Trump’s budget, a decline of about $112 million from the amount in the fiscal 2017 budget deal.

Federal funding for the Individuals with Disabilities Education Act (IDEA) goes mostly to Part B, section 611 which:

authorizes grants to state and local education agencies to offset part of the costs of the K-12 education needs of children with disabilities …  Part B, section 611 authorizes funding to students age 3-21 …

“How Teacher Training Hinders Special-Needs Students,” (The Atlantic, March 1, 2017) looks at efforts to “mainstream” special education students and the challenges this places on teachers:

“California moves to bring special education students ‘into the fold’ of mainstream education,” (EdSource, March 14, 2016) looks at California programs and emphasizes the role of federal mandates tied to federal funding:

Ordered by the federal government to elevate academics for students with disabilities, and by the state to raise low-income student achievement, the California Department of Education is working to create a unified system that will do both, …

Long an island in mainstream education because of its complex federal mandates and funding streams, special education is not explicitly named an area of focus in California’s school finance system. But 70 percent of students with disabilities are members of the high-needs groups that are intended to benefit from the new student supports,

But here is a key issue with special education. It is a broad and getting broader term. Are students numbers increasing for state and federally-funded special education programs because a) autism and other learning disorders are increasing, or b) because definitions of those qualifying for special education programs are being stretched (each student qualifying brings new state and federal funding for a school and school district, plus allows school testing scores to be raised by excluding more students who qualify for special needs instruction), or perhaps c) instructional changes leave more students with learning challenges, or maybe d) more time with video games somehow contributes to classroom cognitive problems?

Amazingly, according to the EdSource article above for students now labeled as requiring special education, “90% have no cognitive impairment”:

What kind of “speech and language impairment”? An in-depth article from special education debates in Connecticut (below) may shed some light. But first, it should be emphasized that state/federal special education disputes are widespread.

“What Texas did to its special-education students,” (September 18, 2016) notes federal special education challenges across a number of states:

For example, the Connecticut State Department of Education said last month that the two largest school districts in the state — Hartford and Bridgeport — were not meeting federal and state laws in regard to providing students with disabilities an appropriate education, according to the CT Monitor.

The Iowa Department of Education recently cited more than 100 incidents of noncompliance with federal laws and regulations in the Iowa City school district’s special-education program, according to the Gazette.

After years of steady decline, the nationwide count of school-age students covered under the Individuals with Disabilities Education Act has shown an upswing since the 2011-12 school year based on the most recently available federal data, driven by rapid growth in such disability categories as autism.

The count of students ages 6-21 with disabilities fell to a low of 5.67 million in fall 2011, but had risen to 5.83 million by fall 2014, the most recent year for which statistics are available.

A third of the nationwide increase in 2014-15 came from one state, New York. The reasons …

Education Week lists increasing autism (and the state of New York) as the main cause. CT Mirror has a special page for special education news in Connecticut, which includes link to “Troubled schools on trial: Special education driving costs and controversies,” (CT Mirror, December 14, 2016):

The rate at which students are identified for special education varies drastically across school districts, and school officials differ on whether that’s because districts are over- or under-indentifying students. But they agree the rising cost to educate these students has outpaced inflation and crowds out other supports for students.

This article on special education costs in Connecticut begins with a long-standing debate over how best to teach children how to read: whole language vs. phonics:

This stalemate over reading methods persists even though reading deficiencies are the top reason children without autism or biological disabilities are being referred to special education – and as special education costs skyrocket throughout Connecticut.

“My opinion is the vast majority of kids are not disabled; they’re instructionally disabled,” said Cohn. “The thinking is, ‘There must be something wrong with you,’ not ‘let’s change the system.’”

For more on the whole language/phonics debate, see “Whole Language and Phonics: Can They Work Together?” (Education World, 1997, 2016?) which argues there is room for both in education:

In a recent International Reading Association (IRA) position statement — a statement that shocked many in the reading community who, rightly or wrongly, had seen the IRA as a bastion of the whole language movement — the organization took a stance supporting phonics within a whole-language program. [link to IRA: The Role PHONICS Reading Instruction pdf here.] 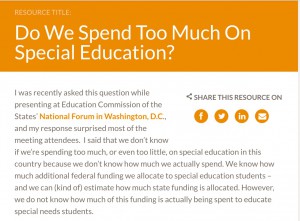 No easy answers for state and federal special education funding, expenditures, and priorities, but the lack of date makes the challenge harder.  “Do We Spend Too Much On Special Education?” (Education Commission of the States, July 27, 2016) reports that states spend $19 billion on special education programs and the federal government adds $11.5 billion. That’s where the money comes from, but apparently no one knows what the these funds are actually spent on.

There is little information available about how much school districts in the U.S. are actually expending on the education of students with disabilities. Most states don’t require districts to report their special education expenditures, and those states that do tend not to require that they provide detailed financial information.